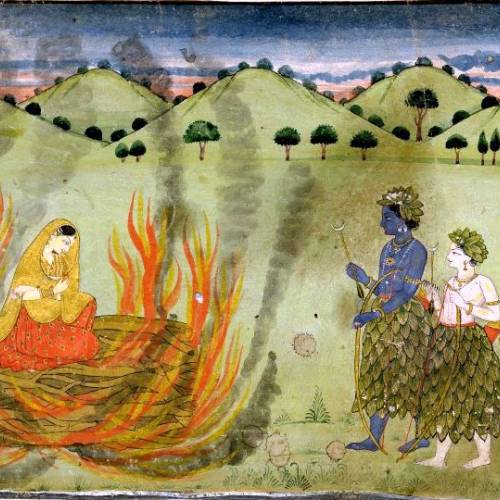 Chai, now widely known by tea lovers and aficionados alike, refers to a special tea made with spices and herbs for a unique flavor blend. The word chai is originally Persian, but may now refer to any number of spiced teas, and in many countries often implies an infusion made with milk.

Today chais are well-loved even by coffee drinkers, and most of the recipes mirror the ancient South Asian tradition of boiling milk and water with tea, spices, and sometimes sweeteners. Our Sita Chai can be made the same way, if you like, though it is good on it’s own as well. Either way, it is best drunk with a story, so sit back, relax, and rest your mind in the tales of Ancient India.

The lovely Sita is highly regarded in Hindu mythology. An avatar (or manifestation) of the goddess Lakshmi, bestower of wealth, she was the daughter of the Earth goddess Bhūmi and was raised as a princess by adoptive parents. Eventually she married Rama, the well-loved and dashing hero of the Hindu epic the Ramayana, who is also a god’s avatar – Vishnu, in this case.

When Rama was forced into exile, noble Sita forsook her splendid palace life to follow him into the forest, but unfortunately even a god cannot protect his loved ones all the time. Swayed by her beauty and posing as a harmless beggar, Ravana the king of Lanka kidnapped her and bore her away to his palace. There he locked her away, attempting every trick he knew of to try to win her love, but she was loyal to Rama.

Ravana, unfortunately, was more than a simple king – he was a demon put on Earth. Often depicted as having many heads, many arms, animalistic qualities, and carrying fearsome weapons, Ravana was not to be trifled with. But against the forces of intimidation, as against the attempts at love, Sita was invulnerable.

Sadly, she did not receive the credit she was due when finally her long captivity ended. When her husband came to rescue her, waging a terrible war with Ravana outside his castle, he asked her to prove her love and chastity by walking on fire for him. She did, but it is not enough. His fear was based on Hindu morals of the time: that the story of Sita and Ravana’s enclosure together could be interpreted to mean that men and women might feel free to live together without being married.

These suspicions did not fade entirely, and though Rama believed her innocence, the heckling of Rama’s subjects finally drove him to abandon Sita as his wife. Pregnant, she wandered alone in the wild, finally delivering twin sons within the safe walls of an ashram. When they were eventually reunited with their father, Sita asked the earth goddess, her mother, to release her from this cruel world.

Sita’s is a love story unlike any other, and contains within it the sweetness and spice that remind us of this lovely blended chai. Representative of the creativity and care our Canadian tea company is known for, this black tea-rooibos mix makes for a rich, wonderful brew that hearkens to Sita’s chaste nature, troubled life, and calm acceptance of her fate.

Image: "Painting. Ramayana. Sīta undergoing the ordeal by fire watched by Rāma, Lakṣmaṇa and Hanuman." This image is a faithful photographic reproduction of an original two-dimensional work of art.  The original work of are is in the public domain because its copyright has expired.