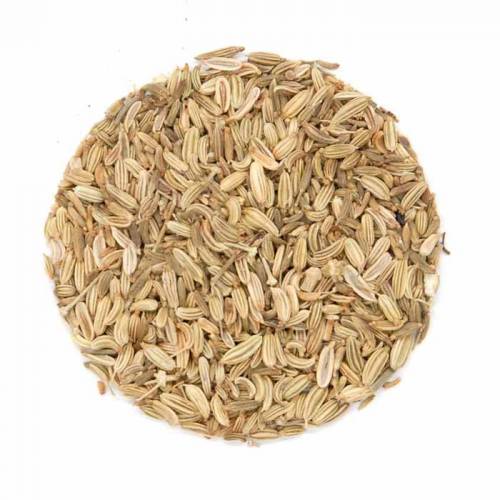 Fennel seed is a spice that is widely used in cooking and baking by almost all culinary traditions of the world. It is an important ingredient of curry powders, spice mixtures, pickles, herbal teas, sausages and even breads. The flavor is similar to that of anise and licorice, with a spicy fresh aroma and a sweet taste. Fennel is sometimes wrongly called anise. Fennel is considered stabilizing to all constitutions and as a remedy for easing digestion. Fennel seeds can be used to make a potent and strong-smelling tea. The tea tastes a little like licorice, with a relaxing scent and slightly bitter aftertaste. Ancient remedies called for the use of fennel tea to treat insomnia, to relieve bad breath or to relax digestive muscles and relieve constipation. Drinking some fennel tea will help cleanse your body and move toxins through your system. Simple Fennel Tea In a teapot, steep the fennel seeds in the boiling water for 5-10 minutes, depending on desired strength. Strain and serve.

Fennel is most commonly used Asia and the Mediterranean region. It was well known to the ancient Greeks, Egyptians and Romans. Fennel is traditionally used in carminative and digestive medicine. The Latin word “foeniculum,” or “little hay” and is said to describe fennel’s feathery leaves, but may also describe a traditional use of feeding it to the goats to increase the quantity and fat content of their milk.

Have you tried Fennel? Tell us what you think!