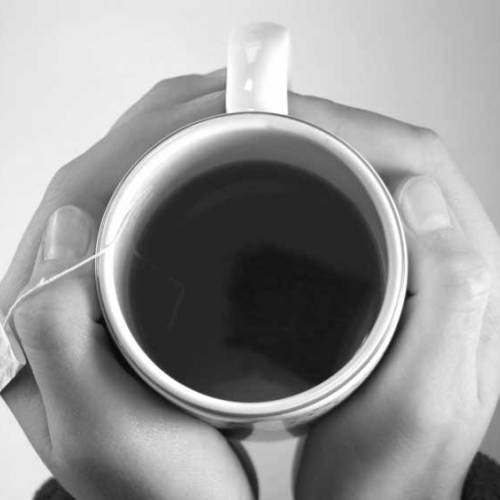 First of all, it is important to revisit the fact that all tea comes from the same plant.  So green teas, white teas, oolong teas, and black teas are all the leaves of the Camelia sinensis plant.  It is the percentage of oxidation of the tea leaves which makes the difference.  This means that at the beginning, right when the leaves are plucked, all tea leaves have the same (similar) amount of caffeine in them.  But then why do some people say that white tea contains less caffeine than black tea?

One of the compounds in tea is called theanine.  Theanine actually has a calming effect on the body.  It has been shown, through EEG tests on human beings, that theanine actually helps to induce alpha brain wave activity, which is a calm but alert and aware state of consciousness.  In fact, EEG tests have been run on experienced Buddhist monks, and they have found that very experienced monks are able to maintain a sustained alpha brain wave state, which for them represents deep meditation:  A very relaxed but focused and acutely ‘aware’ state of being.  Theanine has been shown to help induce this state of consciousness.As a result, theanine actually counteracts some of the effects of caffeine on the body.  Coffee does not contain theanine, so we get quite jittery after multiple cups.  When drinking tea, however, theanine ends up helping to balance out the caffeine rush, without being sedative.  It helps us to focus.  So although there is caffeine in tea (less than coffee levels), we do not experience the same effects as drinking coffee, even after consuming multiple cups of tea.  Tea can help us to focus, but for most people it will not make you jittery.As we always advise our readers, if you have any reactions to caffeine, please consult with a qualified health care practitioner before consuming teas, especially black teas.  Just because there is a balancing effect in tea does not mean that the caffeine will not affect you in some way, especially if you are overly sensitive to caffeine.